What did you do before joining Virtual Peaker? ears, I worked in costume construction at Actors Theatre of Louisville, StageOne Louisville, and the Louisville Ballet. As a stitcher—and more recently as a stitcher captain—I took advantage of my sewing skills as part of a team that built some pretty amazing productions.

I’ve always been interested in computers, but when I was younger women and girls weren’t actively encouraged to pursue careers in technology. I’ve found that many of the skills I used as a stitcher—setting and adhering to deadlines, collaborating with multiple teams, building products sequentially—are highly transferable to software development.

Code Louisville helped me make the shift. When I built my first website, I felt an enormous sense of gratification while coding that wasn’t that far from what I’d felt when I stitched together little pieces of fabric to create coherent, flowing costumes.

What’s your role at Virtual Peaker? 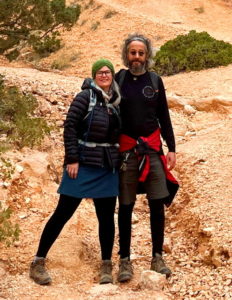 After working 12 weeks at Virtual Peaker as a software development intern, I’m pleased that my position has been extended. Currently, I’m focused on migrating the front-end framework on our admin apps from AngularJS to Vue. In addition, I’ve been helping to edit microsites for our utility clients.

I’m so appreciative that Code Louisville provided me (and so many others at Virtual Peaker) with the tools so I could build a bridge to my new career. It’s a real privilege to work here, and I’m proud to be doing my part to help solve the climate crisis.

For 17 years I’ve been actively involved in the Louisville Kendo Club. Kendo is a Japanese martial art that features bamboo swords at full contact and full speed while wearing protective armor. I was originally intrigued by kendo because I’ve traveled and briefly lived in Japan, I enjoy watching Star Wars and anime, and with my costume background, I found the armor fascinating. In fact, when I was at Code Louisville, the first website I built was for the Louisville Kendo Club!

I also love to hike, and my husband Mike and I recently explored three national parks in eastern Utah: Arches, Bryce Canyon, and Canyonlands.

Looking to help us change the world? Bill is a serial entrepreneur with a PhD from UC Berkeley in Controls and Artificial Intelligence and 10 years of experience with high performance residential energy management and connected appliances. He was previously at GE as an Advanced Systems Engineer in the Connected Home Software Group, but left that role in May 2014 to pursue entrepreneurship full time. Bill grew up in Louisville and returned with his family in 2010 after a long stint in the San Francisco Bay Area. He loves Louisville and is working to make it a better and more attractive city for high tech startups.

Fill out the form below to request a demo of the Virtual Peaker Platform.